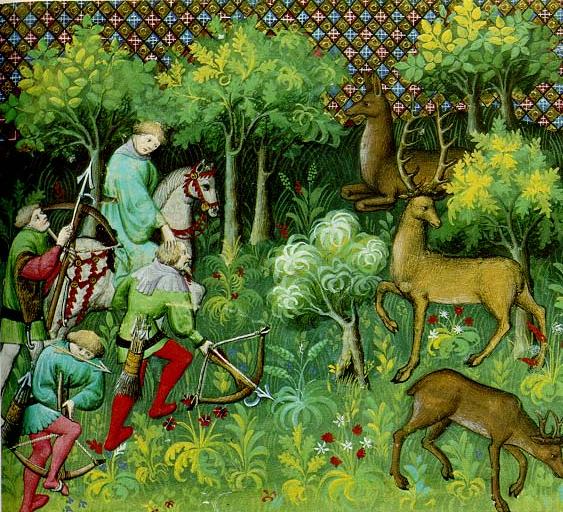 The soft thudding of horse’s hooves on the dirt path were like music to Aurora’s ears, simply because they started to drown out her thoughts.  She had been walking so long that all she could hear were the steady thumps mixed with soft chatter among the nobility.  “This is just what I need” she thought. The hunting party had been roaming through the forest for hours, and today it was Aurora’s job to lead her mistress’ horse.  The lords and their attendants did all of the actual hunting; Aurora’s mistress came along with several other ladies of the court to get away from the gloominess of the castle and share some gossip. Everyone was shocked when Aurora volunteered to go, but she thought it might be good to get out of the castle and immerse herself in the green shades of the forest.  She was desperate to try anything to escape her raging thoughts.  There was never a moment’s peace in her head since she spent the Midsummer Festival with Christopher.  Part of her knew that what she did was for the best, but she couldn’t get that pained look on his face out of her head; it was like she punched him in the stomach.  She felt horrible, and a voice in her head would not stop screaming that she had made a huge mistake.

The ladies decided to stop and take a break in a small clearing, so Aurora led the horses away to tie them up. Meanwhile, the other ladies-in-waiting started to set up a small meal on the grass.  Aurora found a nice oak with low branches, and she slowly tied each horse to its own branch.  She paused to stroke her mistress’ horse and sighed.  Her brain was completely fried from being at war with herself.  “In time it will pass,” she thought.  She stood there with her hand on the horse’s shoulder, lost in thought.

Aurora snapped back to reality when she felt a hand come over hers and slowly take it down from the horse’s shoulder.  She thought it was one of her ladies-in-waiting come to check on her, so she turned around to apologize.  But who she saw nearly made her scream.  It was Christopher, slowly pulling her hand toward him with his pointer finger pressed to his lips.  She tried to say something, but he put his free hand up to her mouth.

“Please, come with me,” he whispered.  “I just want to talk to you.”  Aurora turned back to make sure no one had seen him, then she slowly nodded and snuck a little ways into the forest with him.

“Have you been following us this whole time?” Aurora asked when they were out of earshot.

“Yes,” he said, looking a little ashamed.  “I was in the square when I caught a glimpse of you leaving with the hunting party earlier this morning.  I followed you because this might be my only chance.” Aurora could tell he was having a hard time saying this, because he paced in random directions as he spoke.  It made her uneasy.  She crossed her arms and angled herself so that she could run back to the ladies if things went wrong.

“Your chance to what?” she asked.

“To change your mind!” He stopped and looked her in the eye.  “I need to be completely honest with you.  Ever since the festival, I’ve barely had a moment’s peace.  If you refused to see me again simply because you had no affection for me, then I would be a reasonable man and leave you be.  But I have seen it in your face!  Unless I am mistaken, I have seen more than enough signs from you that you might have affection for me too.  Do you not deny it?  Because if I am wrong, then you can send me home at once.”

“I appreciate your flattery, Christopher, but you seem to have gone blind to my reality.  You may know my name, but you don’t know what or who I am, or even what I can or cannot offer you!”

“You mean your rank?  Or do you mean your reputation caused by your father?  Is that it?” said Christopher.  Aurora took a step back.  So he did know about her father after all.

“How can you know about me and pursue me anyway?”  Christopher’s eyes softened and he took a few steps toward her.

“Yes, I have heard the whispers about your father, but that’s all they are to me, whispers. Because of that, I chose not to believe them.  I didn’t know who you were when we first met until I asked Eric after you left.  How else could I have put your name on that necklace you wear?”

Aurora felt her heart fall to her stomach.  She never told him her name.  He knew about her reputation all this time.  Her hand came up to the necklace that she couldn’t bring herself to take off.  “Why didn’t you ask about him?  You didn’t ask anything about me.” she said.

“I wanted to hear about you from you.  But only if you wanted to tell me.  I was worried that I would scare you off if I started asking questions, and I wanted to earn your trust.  I don’t care about your family, your status, anything.  All I know is that you are different than anyone else I’ve met, and I’ve never wanted to have anyone by my side until that day when you wrecked my shop.”  They both chuckled softly.  “I want to know you, Aurora, but only if you will let me.”  Aurora’s could feel her eyes moisten as she felt her smile grow bigger and bigger.

“I’ll admit that I’ve been through a rough time as well since the festival,” she said.  “No one has ever shown me kindness like you.”  She held the necklace up between them.  “I want to know it better.”  Christopher smiled as he reached out to hold the wooden sun, but she snatched it out before he could touch it.  “But you’ve got to catch me first!”  She took off running through the trees.  Christopher laughed and tore after her.

“Aurora, wait!  Don’t go too far!  You’ll never come out of this forest if you get lost!”  He started to go into a slight jog after her.  She was nowhere in sight.  “Aurora?”  He stopped and looked around.  She peered around from a tree a few yards behind him and tiptoed closer until she was just about to touch his shoulder.  At the last second he turned around and nearly made her scream.  “You’re going to have to try harder than that!” he said.  He took off running after her, both of them laughing through the trees. 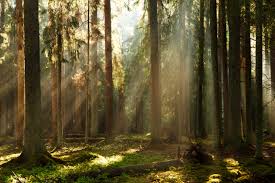 Aurora ran until she realized that they were heading in the direction of the hunting party, and she could hear the faint murmur of the ladies.  Panic set in when she thought of how badly things would go if anyone found her alone in the woods with a man, so she stopped dead in her tracks.  Christopher luckily stopped just in time, and quietly came up to stand next to her.

“You should head back to them,” he said softly.

“You’re right.  I don’t want to, but you’re right,” she sighed.  “How are we going to do this?  If you want to court me, you need my father’s permission.  He’s never bothered to see me, and I’ve been too scared to speak to him.”

“Then we can face him together,” said Christopher.  Aurora shook her head.

“No, this is something I’ve wanted to do alone.  But I will face him soon, I promise,” she said.  He took her hand into both of his and gave it a tender kiss.

“Then if you ever need me, you know where to look. I’ll sit by the front window of my shop now so I can better see you when you roam through the square.  We’ll figure it out, we just have to take things as they come.  Now go back to tending your royalty.”  He gave her hand a squeeze and tried to let go, but Aurora held onto his hand now.  Using her other hand, she turned toward him and pulled his face toward hers in soft kiss.

“Thank you,” she said softly.  They stood there for a moment with their eyes closed and foreheads lightly touching, frozen in a single moment of sweet warmth.

The noise of the ladies in the clearing slowly brought them back, and Aurora squeezed his hand before finally letting go.  “Do you know your way back to the village?  Or are you going to be in hiding the rest of the day? I’ll bet Eric will be furious if you stay much longer.” Christopher shrugged.

“Oh, I’m sure he was furious a while ago, but I’ll be alright.  I marked my own trail back to the village, a trail I almost lost when you ran away from me!”  Aurora blushed as they both laughed.  “See these notches in the trees?” he gestured toward a little “X” mark on a tree a few yards away.  “I made them as I went with my pocket knife, so now all I do is follow them home.”

“Good,” said Aurora.  “Then I’ll let you go face Eric, and I shall return to my ladies.  I’ll visit you soon, I promise.”  She began to walk toward the clearing once more.

“I’ll be waiting,” he said.  She nodded and disappeared through the trees.  He stood there for some time, overwhelmed with the sensation that started to creep over his body when Aurora kissed him.  However, he remembered what was waiting for him when he got back to the shop, and began to follow his markings home.

Aurora managed to get back to her ladies without any suspicion.  As she sat down with the other ladies-in-waiting, she found it hard to contain her smile.  She sat there in silent happiness, until she realized what she had to do next.

“It’s time to face my fears,” she thought.  And she spent the rest of the day planning how she was going to finally meet her father.