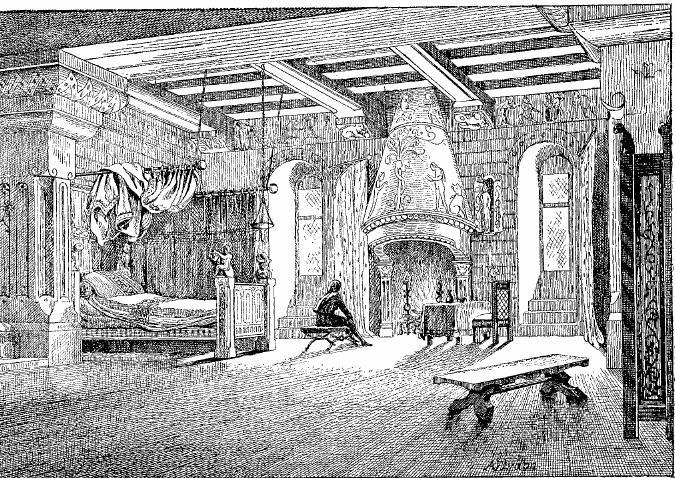 The sky was dark around the village, with most of its inhabitants sleeping soundly. For the castle servants, however, the day was just beginning. Wolsey crept through the castle corridors as they slowly started to glow with bright red light from the rising sun. He carried a set of folded clothes to be taken in to the lord’s bedchamber. He himself was wearing black trousers with black boots, a white tunic, and a brown vest tied over it with a high collar. His hair was trimmed fairly short, with a brown beard that barely covered his neck. He huffed along the maze of corridors into the lord’s bedchamber.

“I’d better hear something interesting this morning,” he thought to himself. He entered the dark, stuffy room to see about six or seven men standing around the lord’s bed conversing quietly. The lord himself still lay in bed waiting for Wolsey to come and dress him. Wolsey walked up to the group of men, and the lord climbed out of bed and stood motionless while Wolsey began to dress him. The lord didn’t miss a beat with the conversation, while the manservant worked quickly and quietly.

Wolsey made it back to his little dormitory and gave a heavy sigh. Still nothing useful, and he had been staying in this castle for months. His term as a temporary servant in this estate was almost up. The lord back at his home estate would surely banish him if he came back empty handed. Time was of the essence, and he needed to come up with a plan to stay at the castle just a little bit longer. He had a few hours to himself now, so he decided to take a walk outside the castle walls. Maybe an idea would hit him then.

Wolsey walked through the village square in a slow trance. He had circled the castle walls once already. With at least two guards looking down on him at all times. “The walls are too heavily guarded,” he thought. “The troops in this estate are too strong. The only way to take down this castle is from the inside. But how?” He continued on lost in thought, and passed by a few stalls with its merchants talking amongst each other. It was starting to become late in the afternoon, and there was a lull in traffic within the castle square.

“I saw Aurora at the festival last week,” said a fabric merchant. He was talking to a woman in another booth covered with ribbons that blew lazily in the summer breeze. “I can’t remember the last time I saw her. She is the spitting image of her mother now.”

“I saw her too,” said the woman. “If I didn’t know better, I would have thought her mother had come back from the grave! What with those long waves of gold Aurora got from her, poor thing.” Wolsey stopped between the two stalls.

“I saw a girl with golden waves as well,” he said. “But I am a temporary servant here. Is Aurora her name?”

“Yes,” said the woman. “She is a contracted ladies maid in the castle, but she hardly ever comes into the village. She’s a reclusive one. Her mother died giving birth to her, and her father Barnama hasn’t been the same since. The village whispers that he’s gone insane, but the poor man just misses his wife.”

“Ah,” said Wolsey. “He must be a smart man though. It was wise of him to contract his daughter in the castle. Especially with her mother dead.” The two merchants nodded in agreement. Wolsey paused for a moment. “Let’s pursue this and see where it goes,” he thought. “Aurora was truly a sight to behold that night.” he said to the merchants. “Eeva must have been one of the most beautiful women in the village.”

“She was,” said the fabric merchant. “Eeva was so kind to everyone. And Barnama was one of our best farmers. But now he rarely leaves his hut.”

“Where would I find it?” asked Wolsey.

“He lives about a half mile east of us,” said the fabric merchant. “It’s a hard dwelling to miss. It’s the tiny hut made out of wood and brushes on the outskirts of the village. But I wouldn’t go associating with the likes of Barnama. You never know what he might do.”

“The man just misses his wife!” said the woman to the fabric merchant.

“The man needs to do his part of the farming!” said the fabric merchant. “I heard the last time he was asked to help with the harvest, he said nothing and walked back into his hut. A moment later he came running out with a knife! A knife! The poor farmers who came by had to run for their lives.” He turned back to Wolsey and held his pointer finger up to him. “Never go near him!”

“Oh no,” said Wolsey. “I only want to know more about his daughter. Do either of you know her?”

“No one does,” said the woman. “Everyone knows what we’ve already told you. She’s grown up in that castle, and prefers to stick to herself. Probably because of her father’s reputation.” She threw a side glance at the fabric merchant, who rolled his eyes in response. “You might have better luck asking someone in the castle. Or better yet, why don’t you ask her yourself? Women like straightforward men.” Wolsey stood in front of the merchants lost in thought.

“I’ll take your advice,” he said. “Good day, madame, sir,” he gave a slight bow to each of them. He walked back to the castle to get ready for his evening routine.

As Wolsey went about the rest of his day, he asked any servants he came in contact with about Aurora. He asked what she was like, what her father was like, and about her social standing. What he got was that Aurora was shy, quiet, her father was unstable, and had little money to her name. Perfect. When he finally got back to his dormitory for the night, Wolsey lit a candle and got out a piece of parchment paper to compose a letter to his lord. He wrote:

You can ready your troops to storm this estate in one month’s time. We must take this castle down from the inside out. Send me a vial of poison and more servant spies, and we will make this estate ready for its new lord. For my final request, I ask that you send me a simple bag of gold to help me stay in the castle a little longer. I understand that your patience is wearing thin, but I promise, this bag of gold will buy you this whole estate in one month.